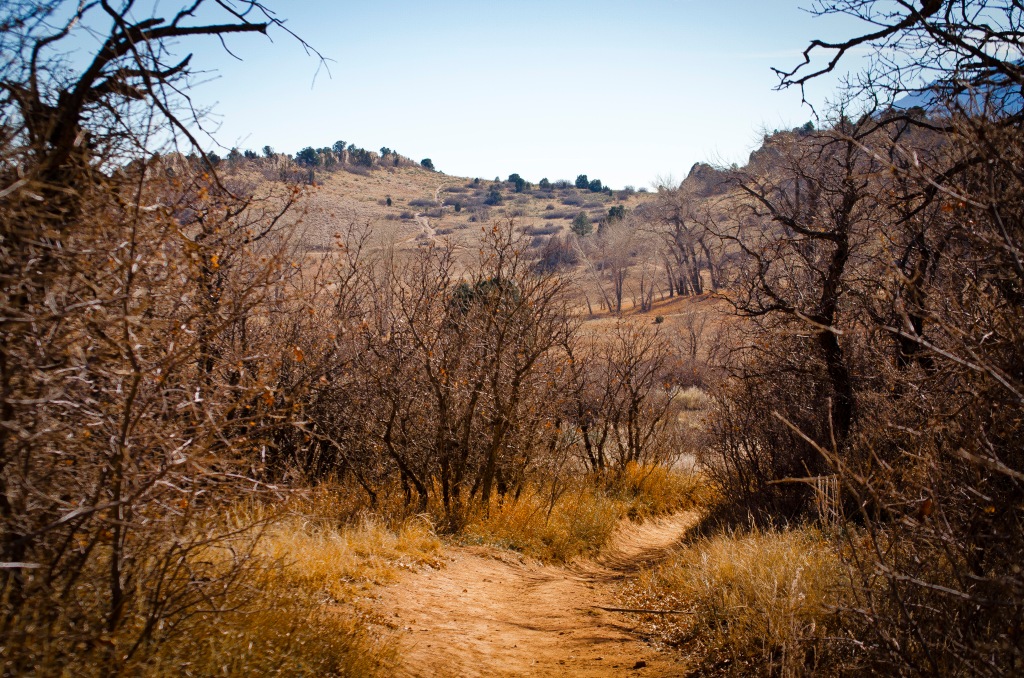 I took the above picture last weekend while out on a hike with Jesse. His 25-pound frame hunkered in a backpack about my torso, he and I hiked some of the trails at Garden of the Gods. It’s a nearby park that I think a national treasure. Set against an oft snow-capped Pikes Peak, huge red rock formations jut skyward, with tiny spires poking through on the flanks.

I snapped the one above as I played with a new camera and tinkered with photo editing when I got home. Amidst the reds, oranges, and arid yellows, I stopped in the middle of the trail when I wondered upon the scene above. As a very amateur photographer, I usually snap the best photos when the scene is already framed for me; all I have to do is hold the camera up and press the button. It’s just a matter of not being stupid enough to pass by a good shot. This was one of those times: a narrow, twisting trails meandering through bare trees and bramble gets lost in the thicket, while in the background it emerges again in the open, ascending and then cresting a hill. How could this not stand out amongst the painted rock walls elsewhere in the park?

Perhaps it’s because I’ve been re-reading The Lord of the Rings, so I’m already pre-disposed to the journey motif, but this image has remained impressed in my head ever since I took it. I’ve never had the pleasure of actually taking a photograph that inspired so much introspection, other than the few occasions when working at The Herald-News I had stumbled upon some tragic scene. No, this photograph has been different. 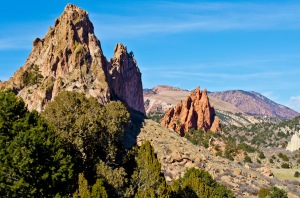 I’ve been thinking lately about wisdom and knowledge. Even though I’m only twenty-five, for some reason I’m already finding myself with some influence, though probably not as much I think I have. In addition to crafting content for an organization doing weighty work, I freelance for a couple different highly respected companies. My real influence comes, though, in the two little boys I walk home to each day and the mother who stays with them. The thought that I will likely be the most influential man in their lives from here on out scares me. I can live with the responsibility of using the written word for the small audiences who now read it; they interact with me at most once per week. But what of these two little boys, who will endure years of my temper, my selfishness, my greed, my naiveté, my inexperience, my folly?

I’ve been talking with a writer friend about such things. Though a few years older than I am, he’s quite accomplished for his age. He runs a well-respected blog, is working on his second book, has been published by numerous reputable publications, and is pursuing a graduate degree at a prestigious, historic university. Even with such influence and success, he questions each day if he should have waited before publishing anything publicly. He wonders if the influence he’s attained has been worth the strain he and his wife have endured — if perhaps his positive influence would be more so had he waited longer to attain it — if he could have done more good by living more of life before trying to write of it. He himself called his own strivings “vanity, vanity, vanity.” 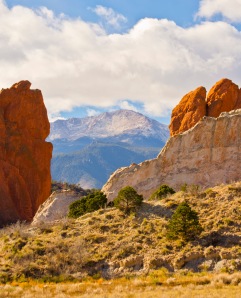 So what if youthful ambition really is what frames the thicket one must hike through before finding the open hill? What if my own aspirations — to write something worth writing, and to do it well — will only become truly attainable after my boys have left the house, after Julie and I have known each other much longer than we have not, after I’ve seen more of death — and more of life? Does that mean that the toil of earlier days is not worth the effort, not worth the wishing, not worth the doing? Is it really vanity pursuing vanities?
I look at that picture I took and realize again my favorite stories to read are those that tell of great journeys. It’s why I loved The Hobbit when I first read it as a boy, and it’s why I love The Lord of the Rings now. Because while the action and dialogue unfold, the plot moves along the rails of a long, unforeseen, unpredictable  journey. The picture I took tells the story of a journey. And in the early foreground are prickly, bare, fruitless limbs. And without the foreground, the background — in which we see the trail rise in the sunlight — would never be near as interesting. The motion of the photograph would vanish. We know we have something in the background because we see the darkness of the foreground.

In his book Tracing the Essay, G. Douglas Atkins tells readers often of one of the fathers of the essay, Michel de Montaigne, who saw essaying more as assaying — the act of determining, an exploration. Atkins tells us:

As he writes . . . Montainge is ‘taking a line out for a walk.’ You sense him reflecting, turning ideas over in his mind, pursuing a thought here, caressing it there, assaying as he tries it on — thinking in the process of writing. The progress is not linear — and it shouldn’t be, for the essayist represent his attempts to ‘get it down right.’

Perhaps there are some aspects of life — though note well not all, as Truth has been revealed generally and specially — in which we won’t really know what vanity is and what worthy striving is without doing whatever is the object of our assaying. For a parent, that means raising children in the midst of your own imperfection. For a child, that means living with your own short-sightedness. For a photographer, that means pressing the button until you learn when not to press it.

Husband, father, writer, and editor living in Greeneville, Tennessee, trying to figure out what's worth saying, and how to say it. View all posts by Michael Reneau

5 thoughts on “Trails Worth Hiking”

Where It All Fits